Huerfano on the BLM oil and gas auction block

Unbeknownst to most people, the oil and gas industry has been nominating and buying up federal mineral rights all over Huerfano County over the last 3 years.   As of the end of 2010, the Bureau of Land Management (BLM) had auctioned more than 32,500 acres of federal mineral rights (including "split-estate").  Another 8,000 acres have been vetted for the upcoming Nov 10, 2011 BLM quarterly oil and gas lease sale.

The lease rush started out small.  In 2008, 1,080 acres in seven separate plots in a single parcel (#COC72467) between La Veta and Cuchara was auctioned by the BLM. The entire parcel was purchased by Wells Petroleum, in Golden, CO. for $75/acre.  These leases are "split-estate" because the surface is owned by a private entity while the federal government (or another private party) owns the rights to the subsurface mineral estate.

More information on this lease sale is available on the BLM oil and gas lease website here, and at:
http://www.blm.gov/co/st/en/BLM_Programs/oilandgas/leasing/sale_archive.html.

More information on split-estate is available here, or on the BLM website here. 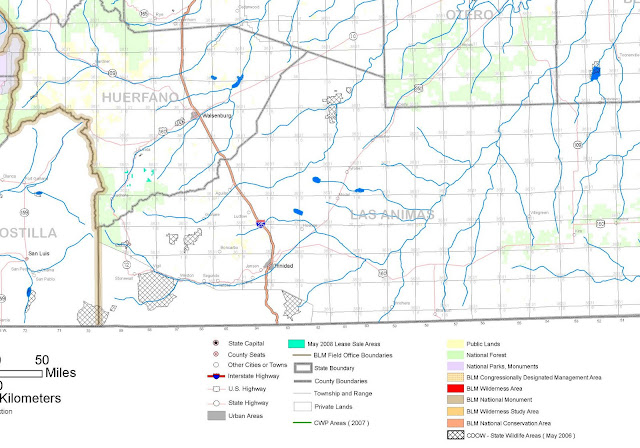 The May 2009, BLM offered over 34,000 acres in Huerfano County (see map below) of which 31,537 acres were sold.  The vast majority of parcels were bought by or awarded to Hannon & Associates, Inc. in Denver, CO, but Wes State Lands Inc. in Casper, Wy and Spoon Valley Energy in Roswell, NM also purchased leases.

According to a 2009 report in the Huerfano World Journal, the sale, "Included over 3,000 acres west of La Veta, about 5,000 acres around Silver Mountain, and thousands of acres in the Gardner area both north and south of Hwy 69 and east and west of Gardner.  Also included is a 40-acre parcel owned by Deane and Patricia Merryman in about the middle of Navajo Ranch Resorts".

According to the Journal's report, "The Huerfano County Commissioners sent a letter to BLM protesting leasing 'near wilderness areas and environmentally sensitive areas within our county." 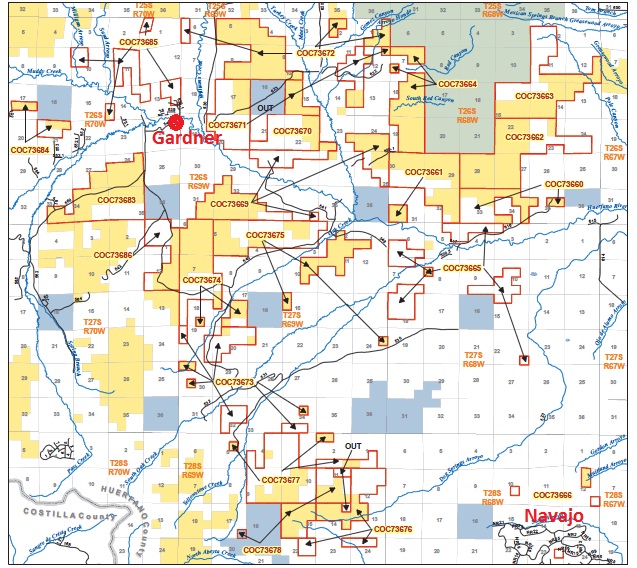 If you want more specific information about the size, location and buyer of the parcels sold in the May 2009 BLM Oil and Gas Lease, contact us here, or download the lease sale notice and final sale results from the BLM oil and gas leasing webpage here, or at:  http://www.blm.gov/co/st/en/BLM_Programs/oilandgas/leasing/sale_archive.html

We just learned that the Nov. 10th, 2011 BLM lease sale includes another 8,000 acres in Huerfano County.  The parcels are grouped into 4 main areas shown on the 4 maps below: Group 1: Gardener, Group 2: Mt. Maestas, Group 3: Black Hills and, Group 4: Wahatoya. 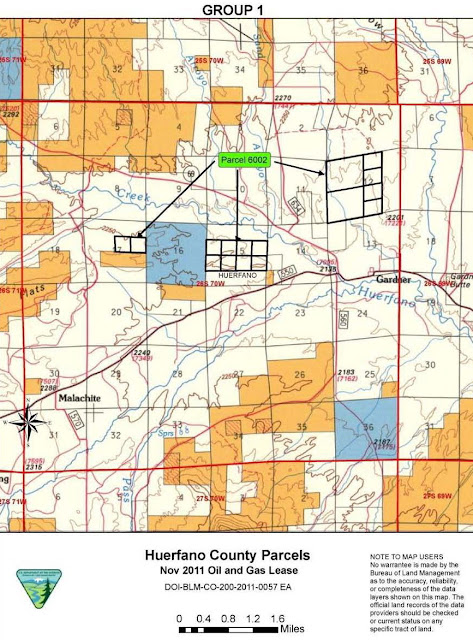 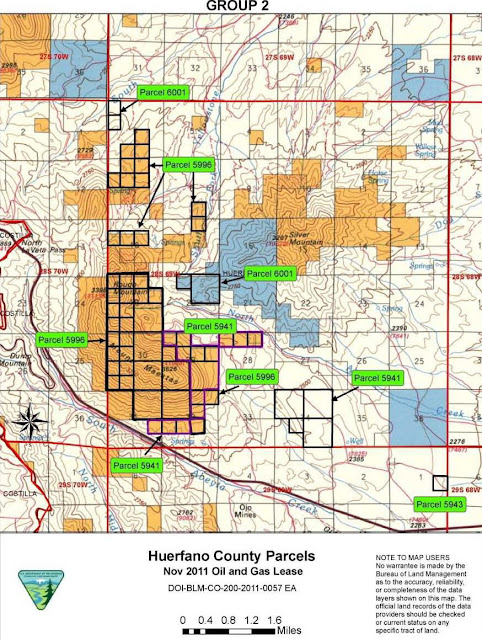 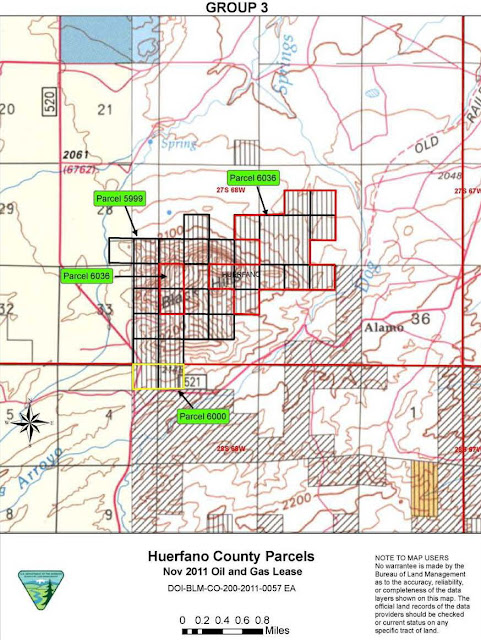 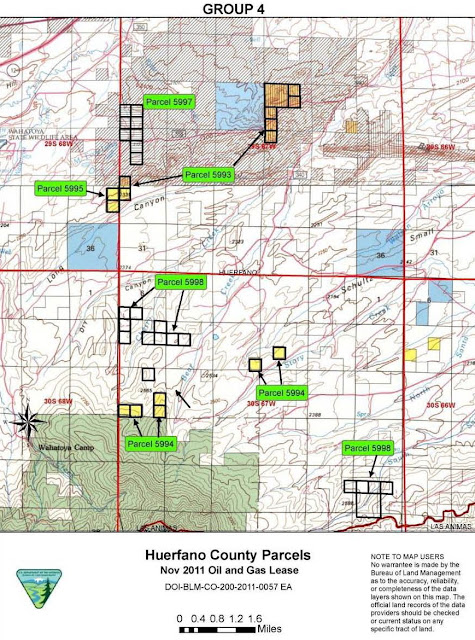 This is the first BLM lease sale where the agency has conducted an Environmental Assessment under the National Environmental Policy Act (NEPA) prior to the actual lease sale.  This is a move by the Department of Interior to reduce the number of public complaints and formal protests generated by lease sales which have risen steadily over the last few years.  According to a 2010 EE News report, "Protesters -- including conservation and hunting groups, state and local governments, businesses and private individuals -- [said] protests are the only means for raising public concerns over impacts leases could have on wildlife habitat, air or water quality, or the loss of recreational or agricultural opportunities".

The 2011 Nov. Draft Oil and Gas Lease Sale EA, is available for download here, or go to: http://www.blm.gov/co/st/en/BLM_Programs/oilandgas/leasing.html#November_10_2011

Unfortunately, the public scoping and the comment period for the draft EA ended on July 8, 2011, before the CHC was organized as a public interest nonprofit.  Filing a formal protest is the only recourse Huerfano County citizens have left to raise concerns about the proposed 8,000 acre lease sale.  But time is short;  Lease protests must be received by 4:00 pm on Sept 12, 2011.


How to File a Protest
on the Nov. 10, 2011 BLM Oil & Gas Lease Sale
§  Protests for the Nov. 10, 2011 Competitive Oil & Gas Sale must be received by 4:00 PM on Sept. 12, 2011.
§  The protest must include any statement of reasons to support the protest. BLM will dismiss a late-filed protest; a protest filed without a statement of reasons, or a protest listing the internal 4-digit parcel ID number.
§  A protest must state the interest of the protesting party, their mailing address, and reference the specific COC 5-digit serial ID numbers that are being protested.
§  You may file a protest either by mail in hardcopy form or by telefax. You may not file a protest by electronic mail. A protest filed by fax must be sent to 303-239-3799. A protest sent to a different fax number or a protest filed by electronic mail will be dismissed.
§  If the party signing the protest is doing so on behalf of an association, partnership or corporation, the signing party must reveal the relationship between them. For example, unless an environmental group authorizes an individual member of its group to act for it, the individual cannot make a protest in the group’s name.
§  Mail protests with delivery confirmation in plenty of time to reach the BLM office by 4 PM on Sept. 12th, to:
Bureau of Land Management
2850 Youngfield Street
Lakewood, CO  80215

For details on each parcel, go to the Lease Sale Notice, 2011, November 10 at:
http://www.blm.gov/co/st/en/BLM_Programs/oilandgas/leasing.html,

And to the Royal Gorge Public Comment Environmental Assessment, available here, or at: http://www.blm.gov/co/st/en/BLM_Programs/oilandgas/leasing.html#November_10_2011

For additional information on filing a protest and what it must include, see pages 6-7 (the pages are not numbered) of this document: