Fortune 4-9 exploratory oil well is being submitted by Shell Oil aka SWEPI using Form 2 application for a drilling permit (APD).  Fortune 4-9 is located near Muddy Creek and Highway 69 a short distance from Gardner, Colorado.
The following comments have been obtained from the Colorado Oil and Gas Conservation Commission (COGCC) website.  Access to the document is not particularly user friendly, and so we have placed it here for the convenience of concerned citizens.
The print is small so the reader will need to use the control+ keys or apple+ to expand the size. 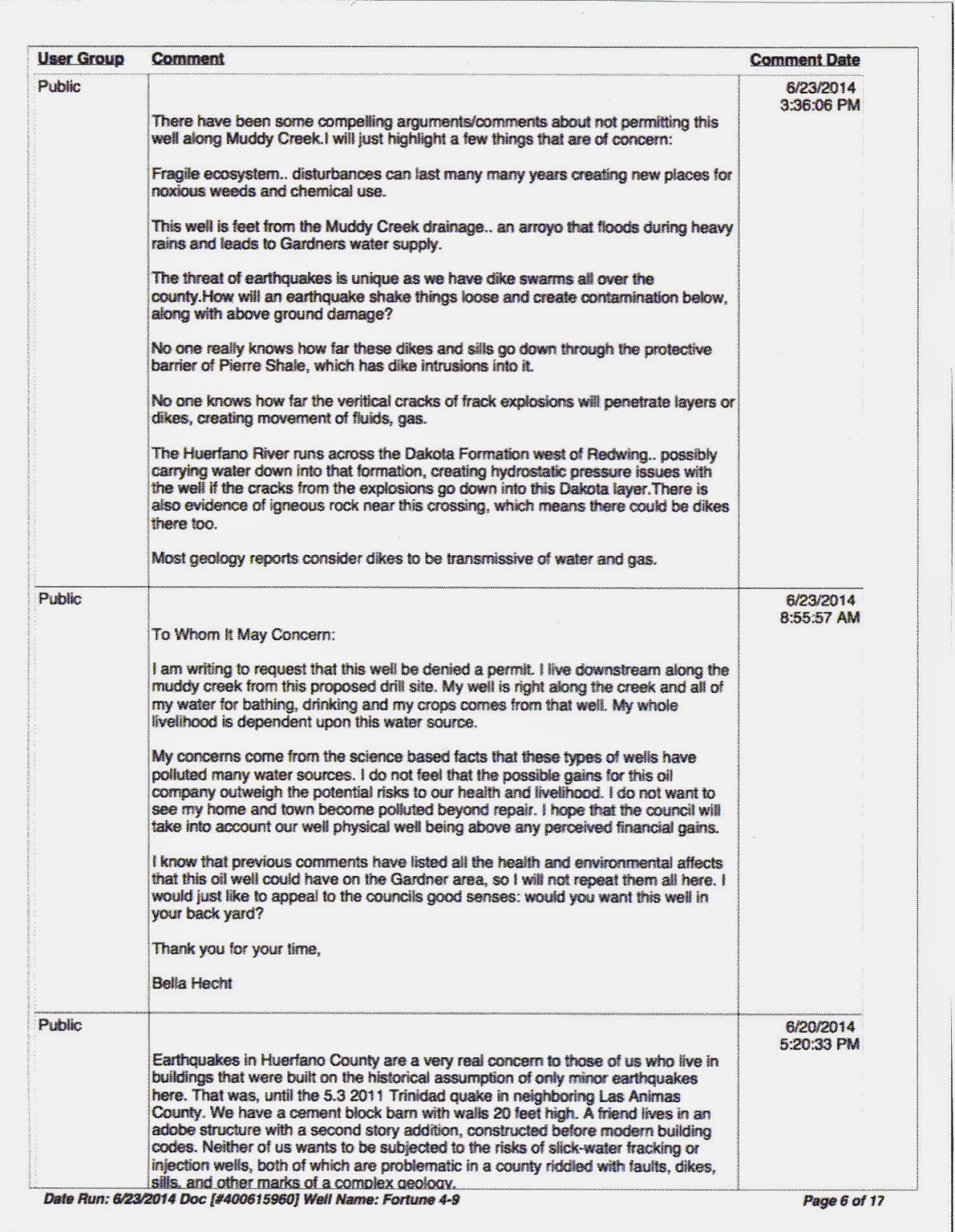 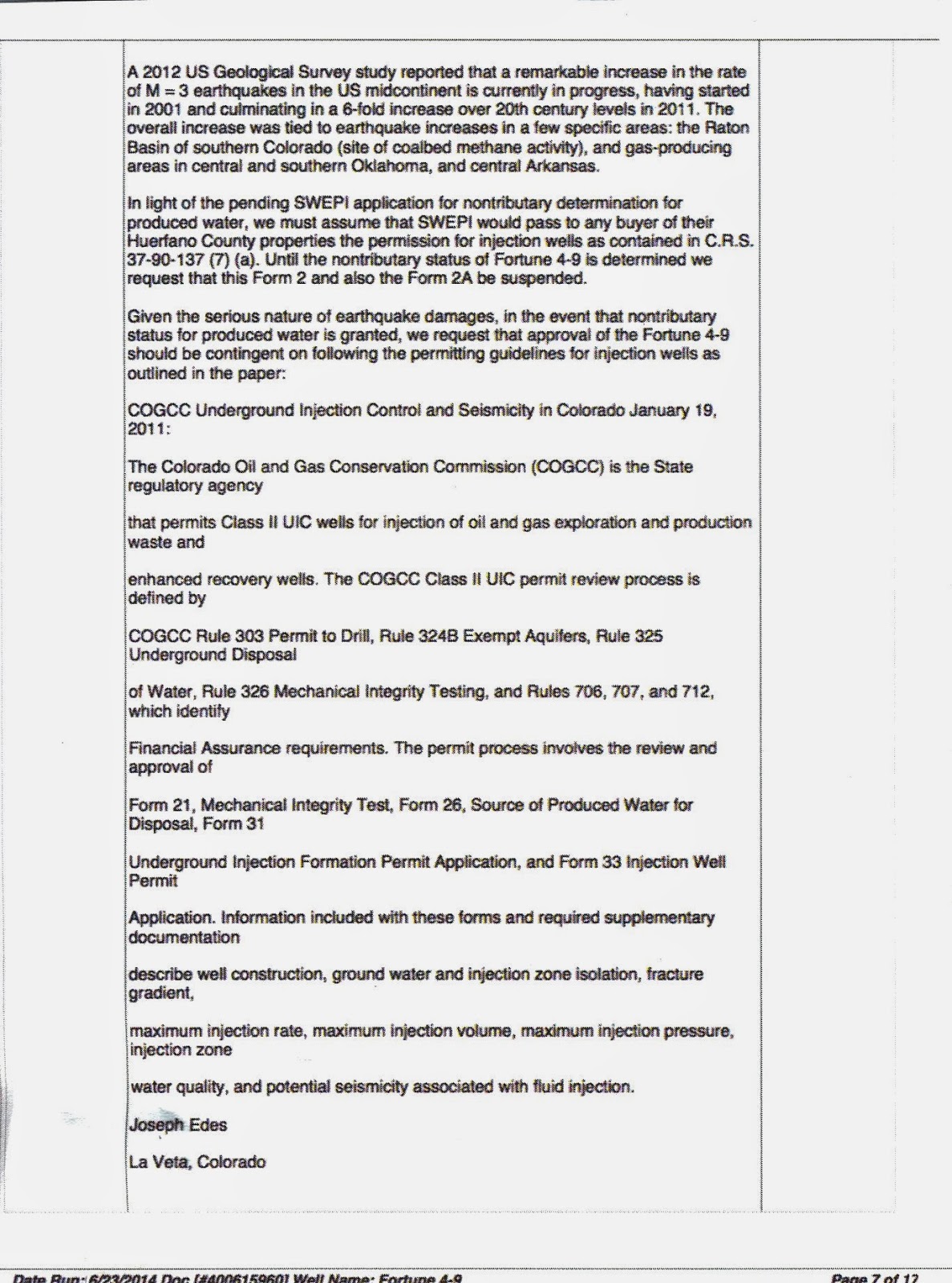 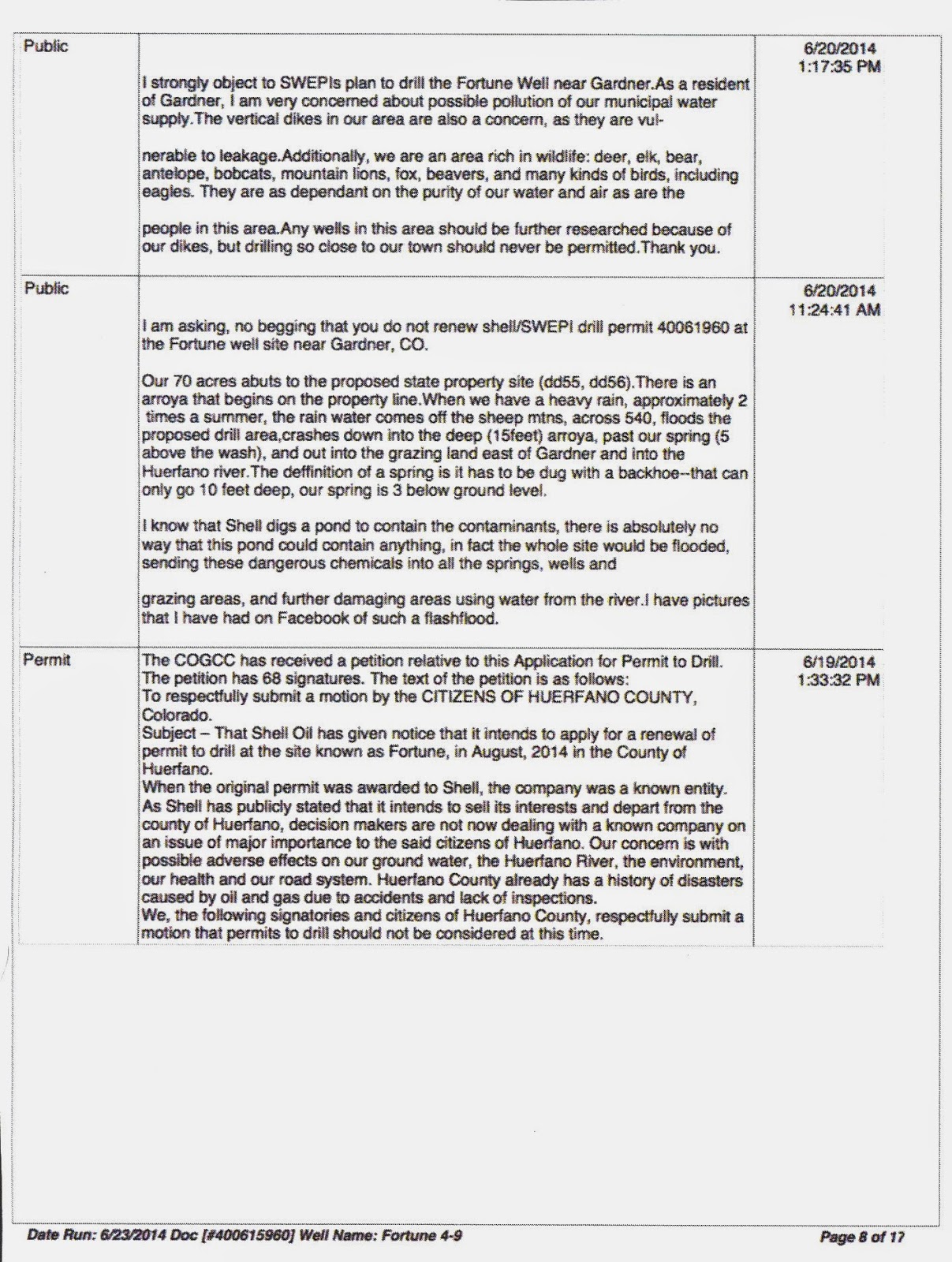 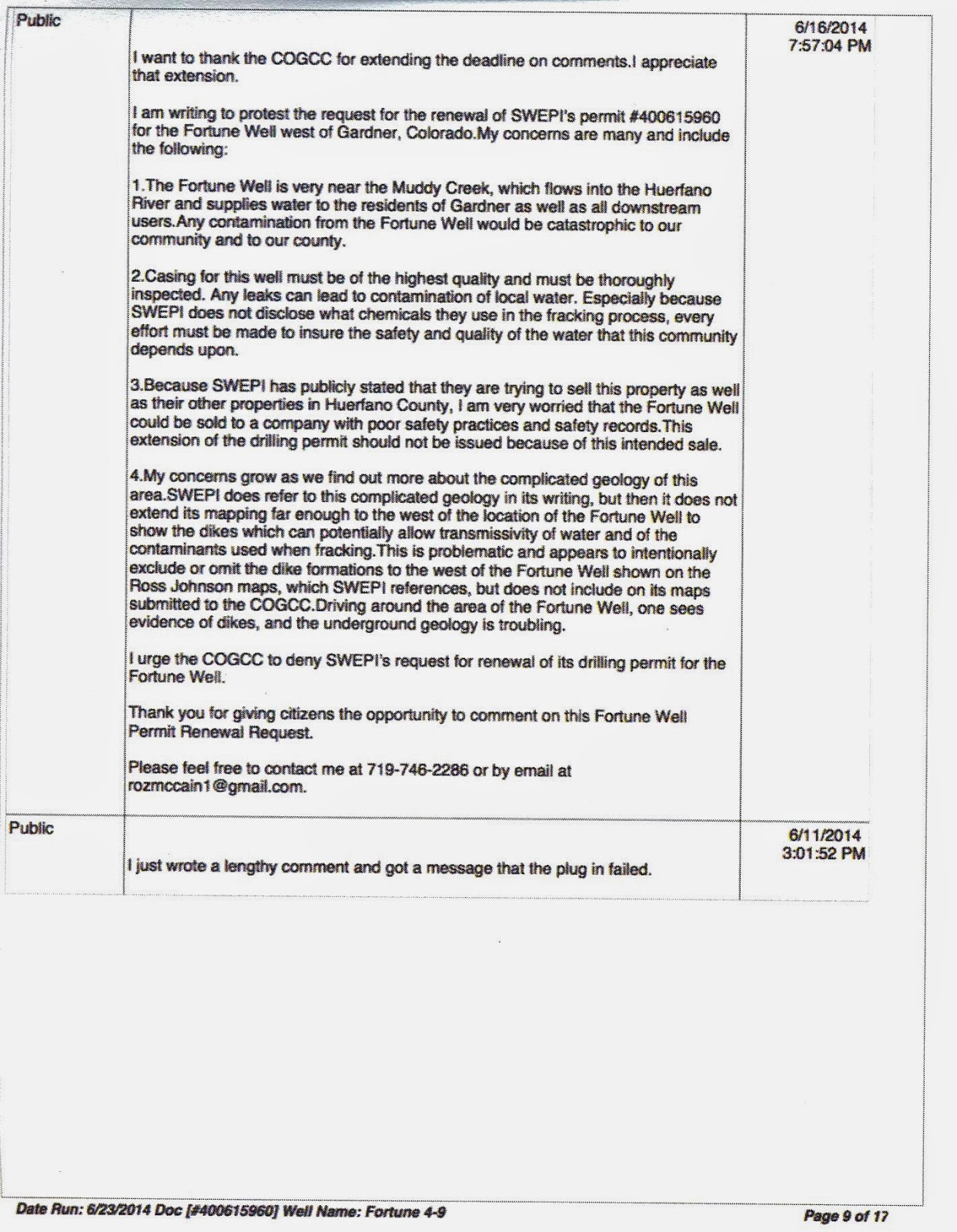 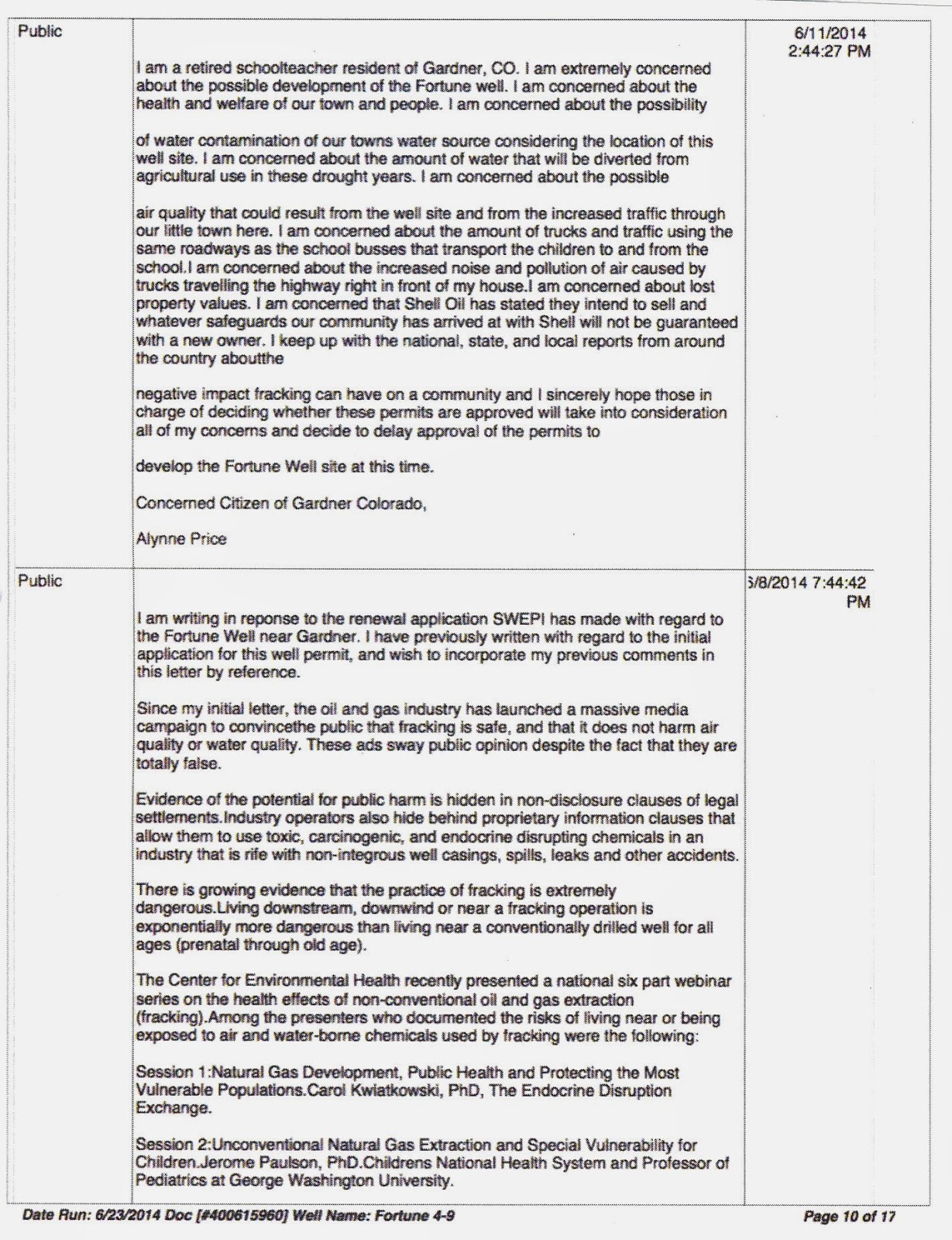 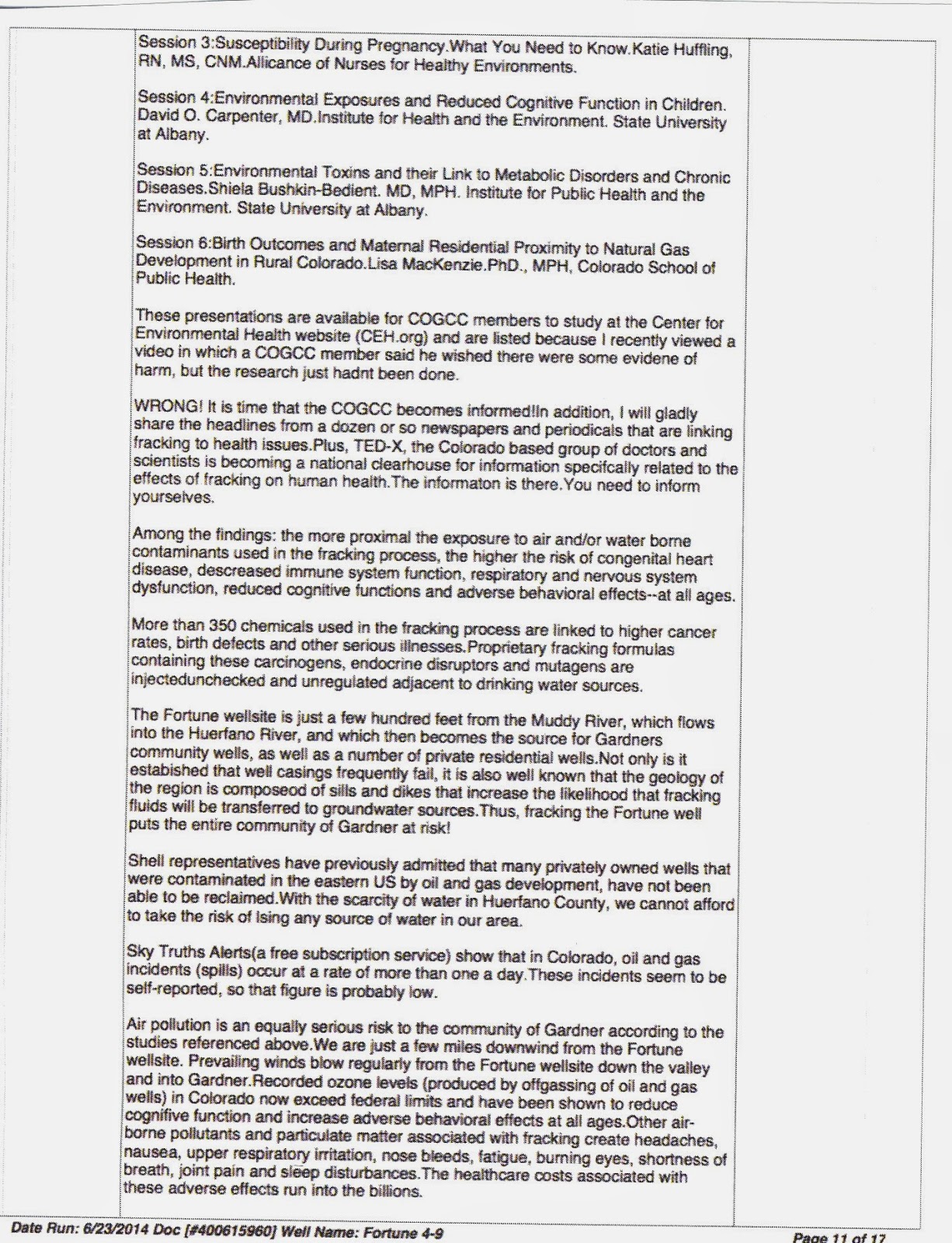 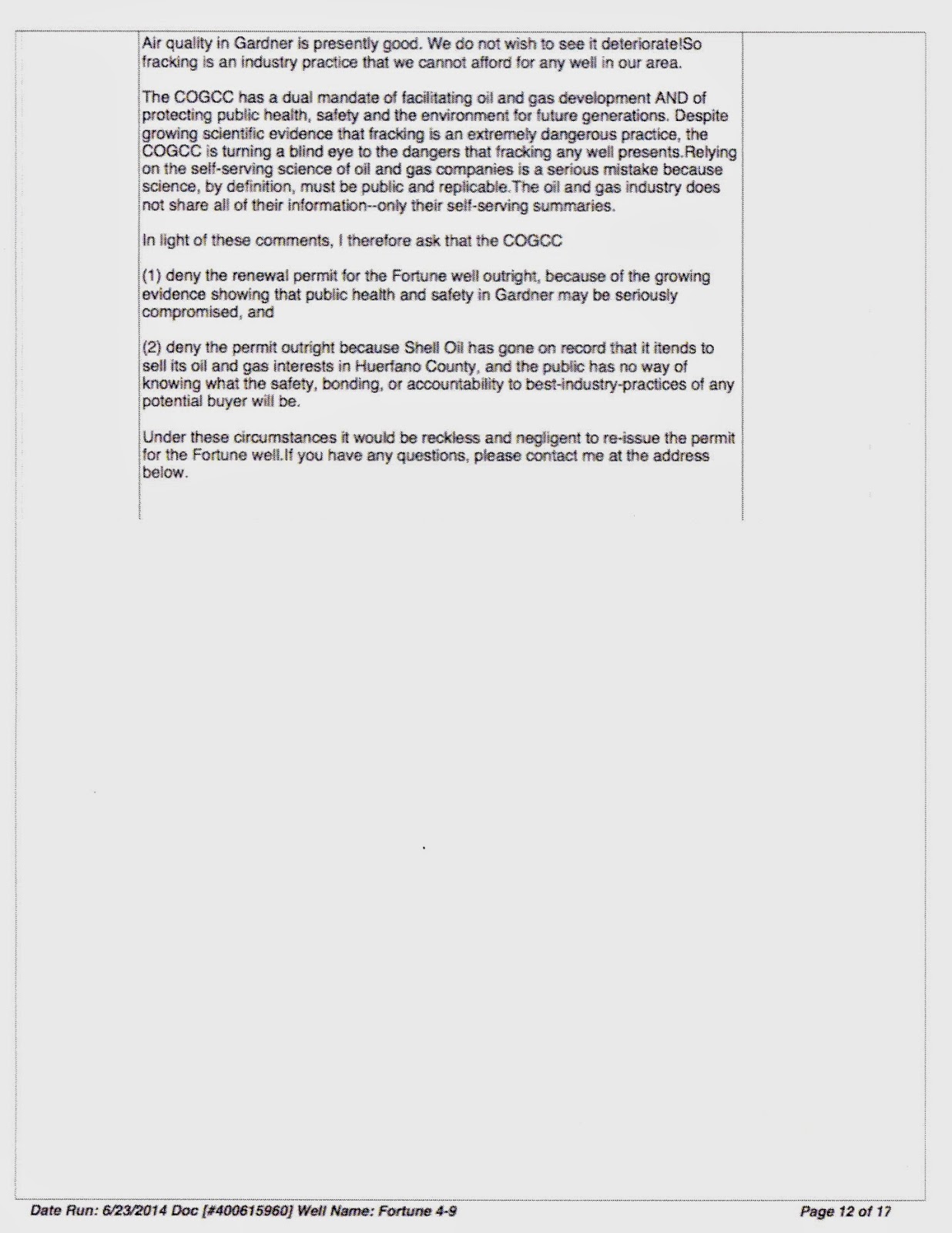 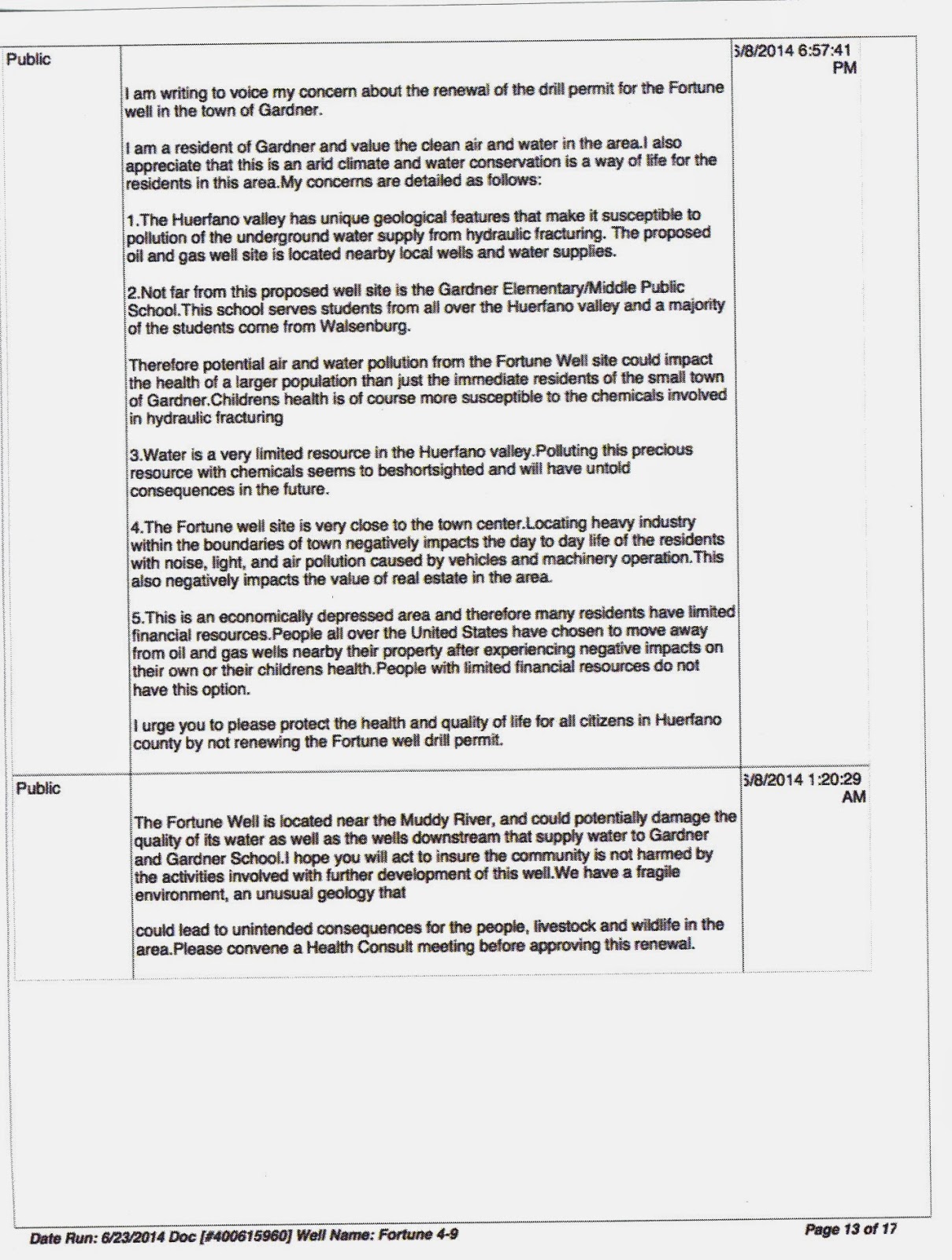 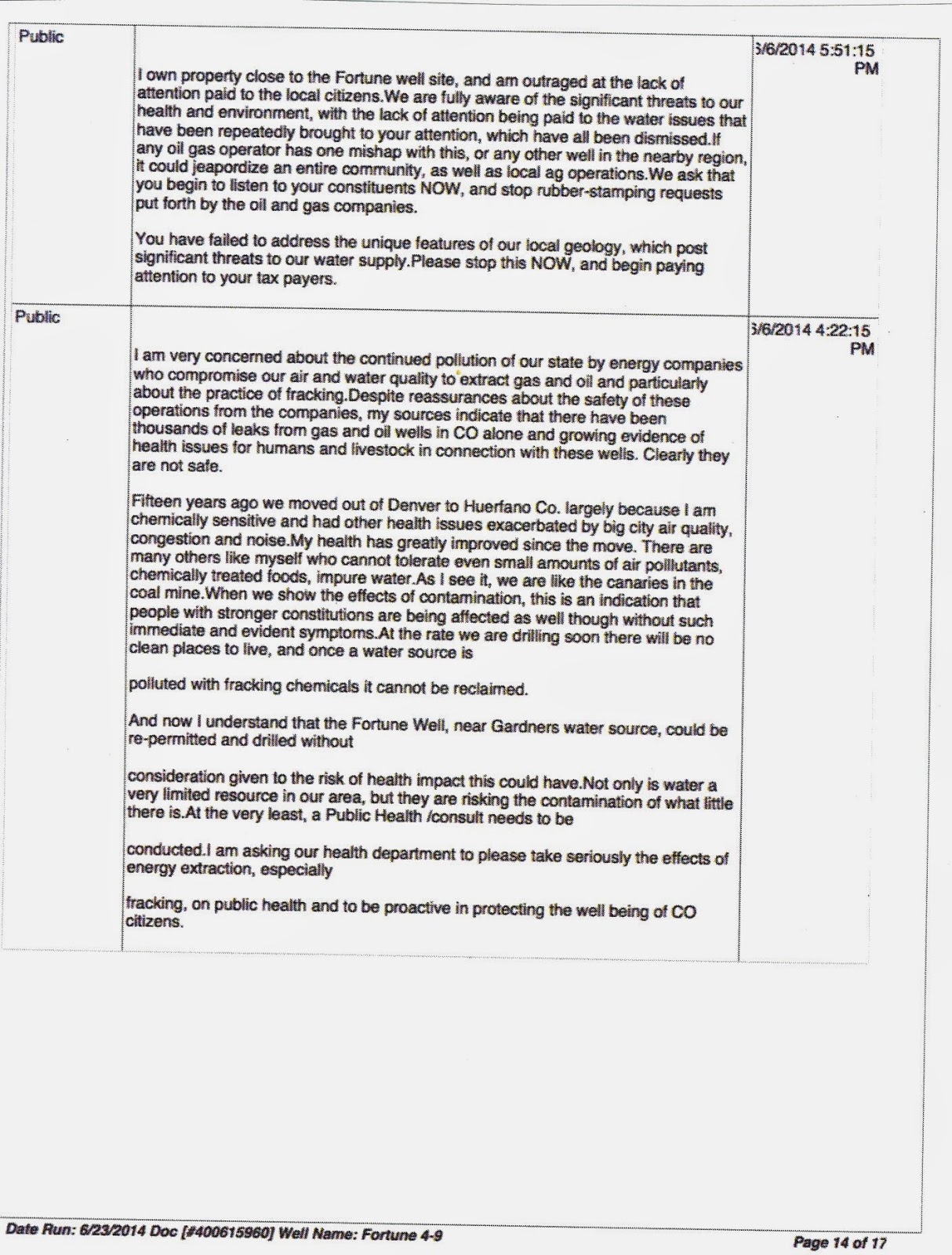 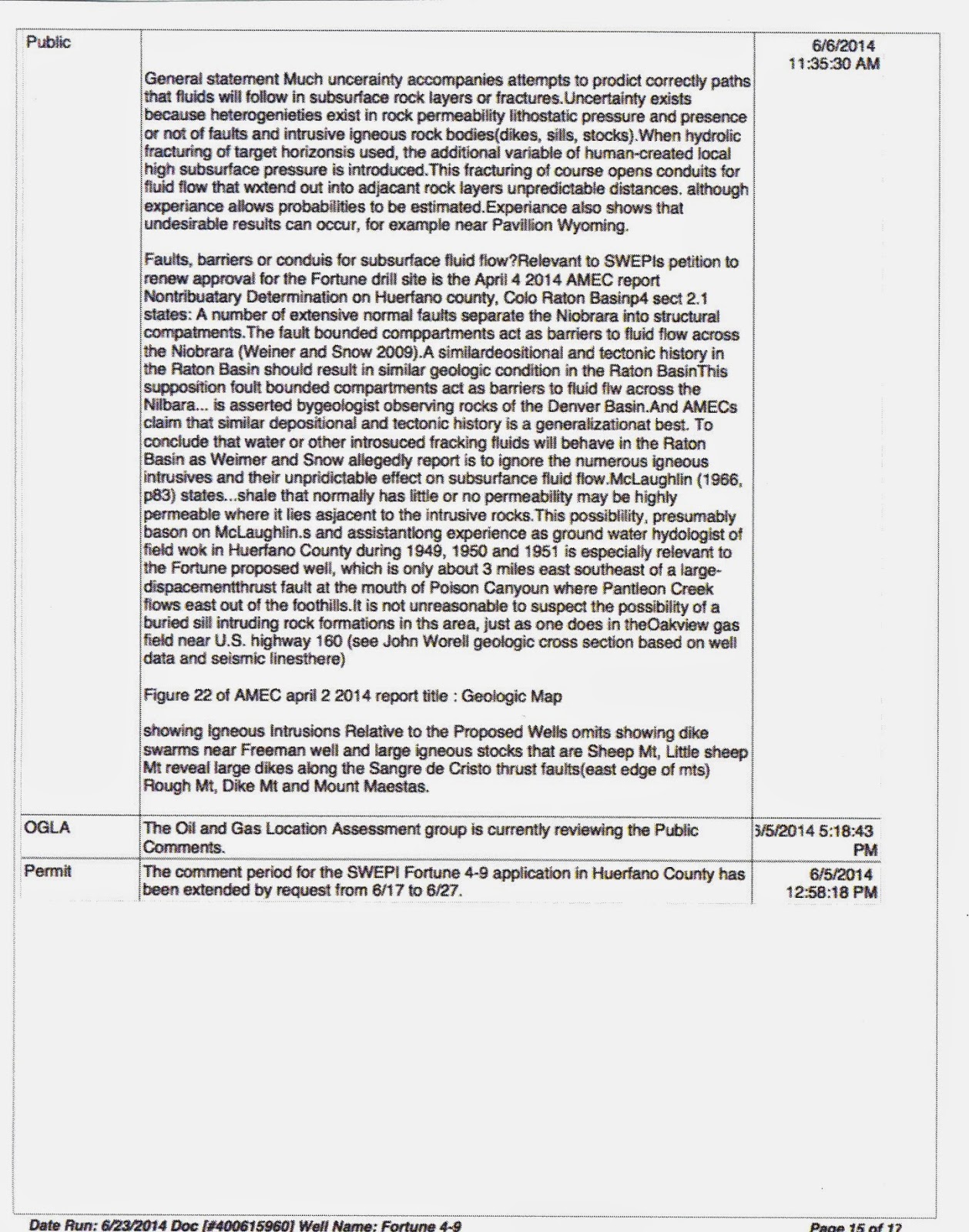 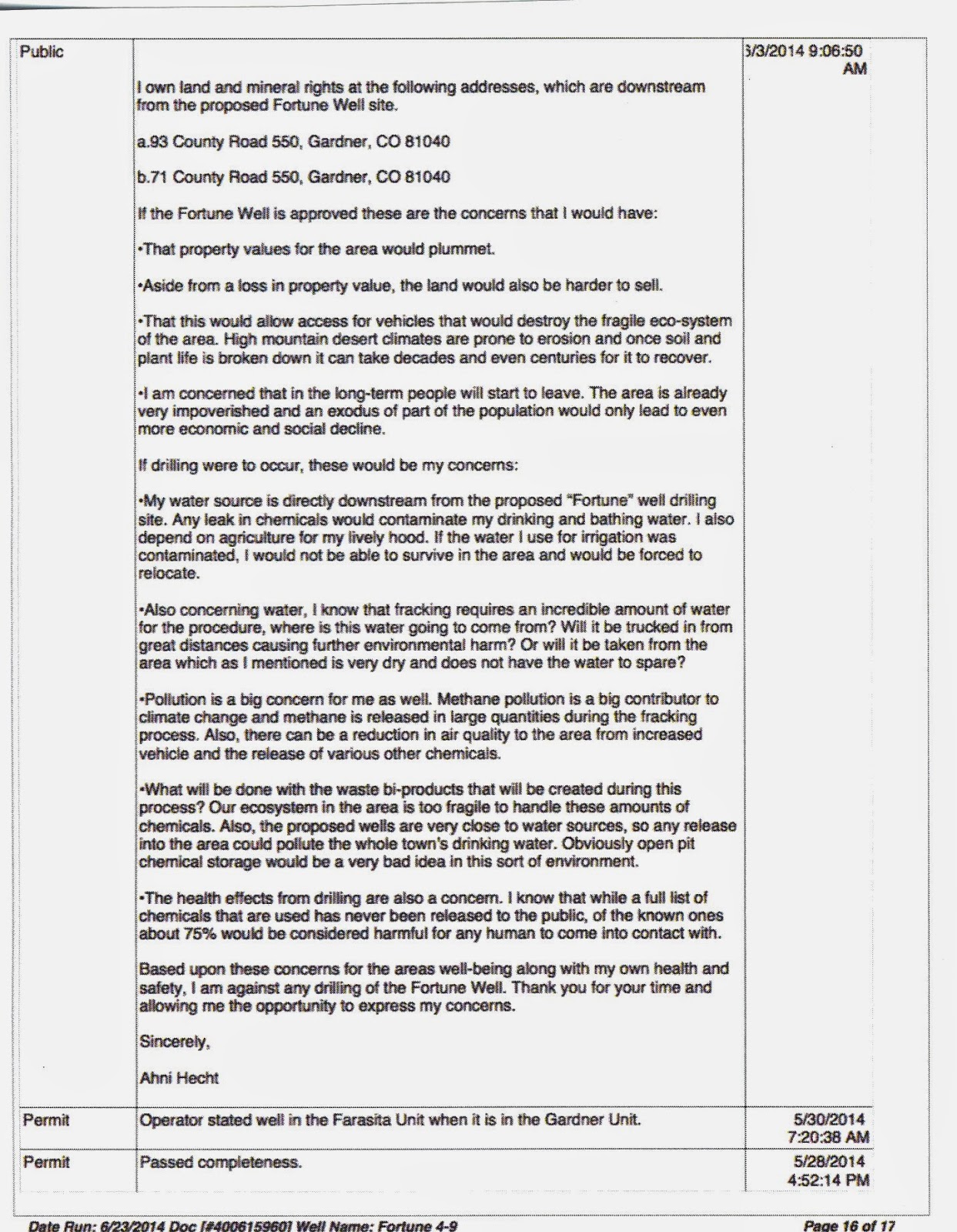 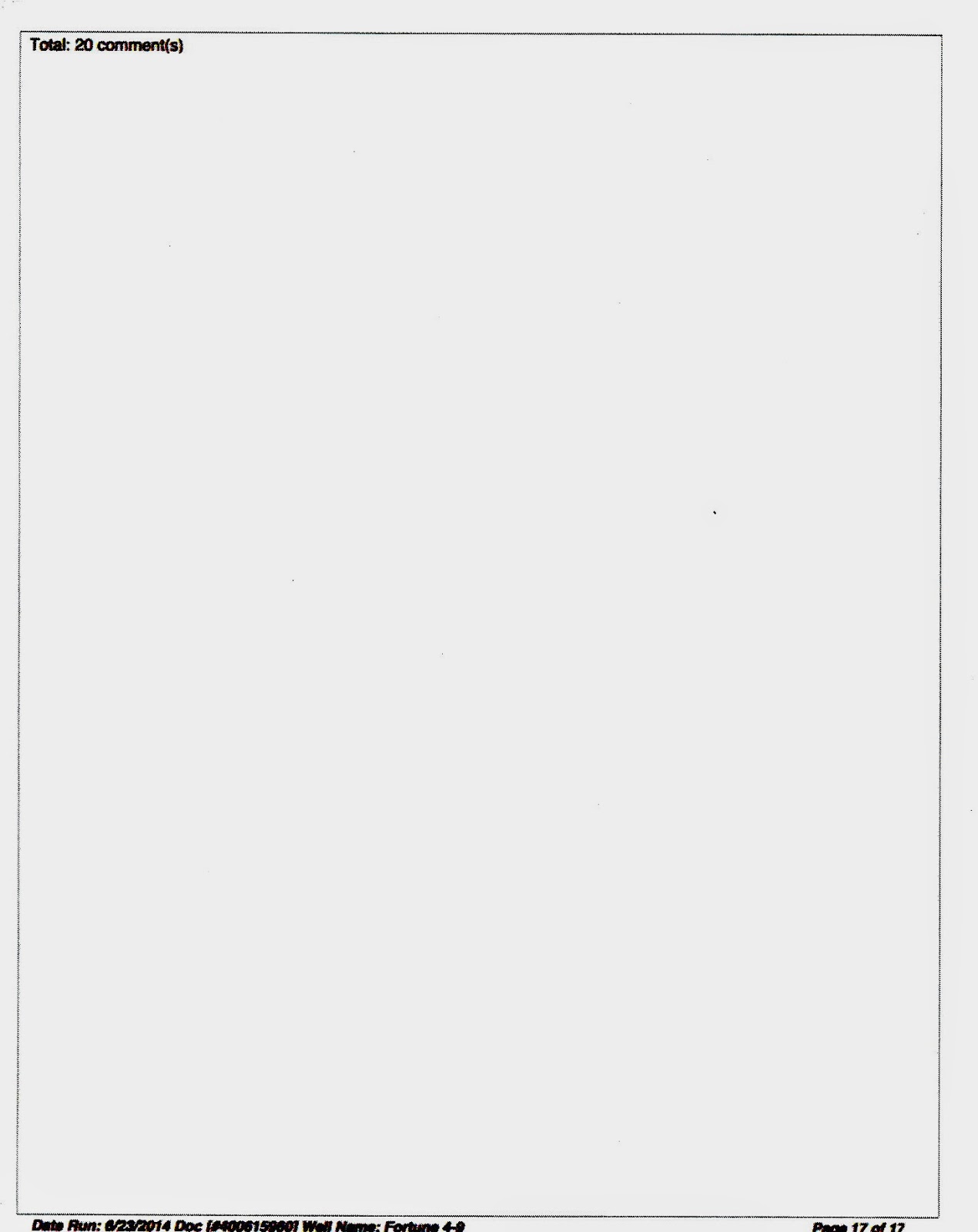 Posted by Citizens for Huerfano County at 10:36 PM 4 comments: 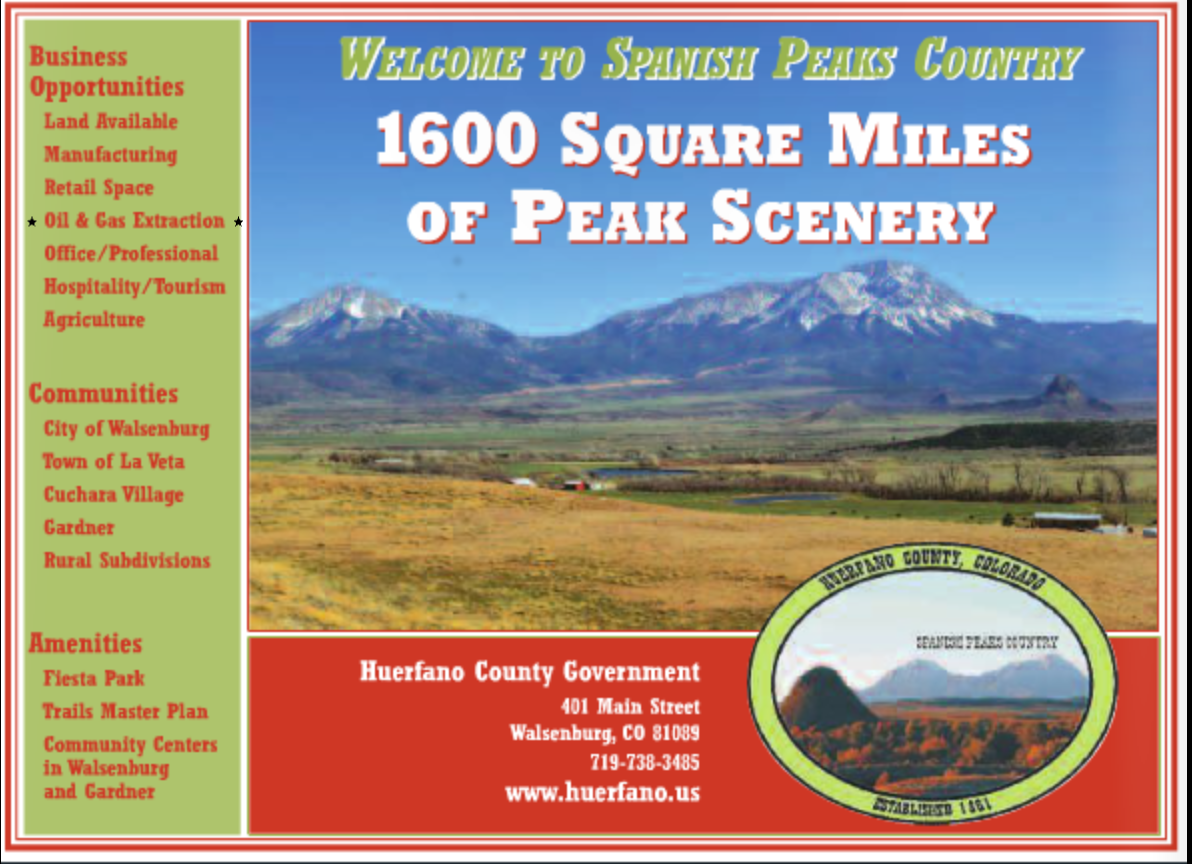 With the tourist season here, it is time to take up the pen once again and give a progress report on our winter's work in our county.  We have discovered that one operator who was banned from further mining has nonetheless convinced a major national bank to loan them millions of dollars against their mineral lease portfolio in Huerfano County.  We have learned of another operator who is pulling very dirty carbon dioxide (CO2) out of the earth and piping it to Texas where it is mixed with precious water to scrub oil out of old wells. Then they have the audacity to say that they are sequestering the very same CO2 in these old leaky oil fields and hoping to get carbon credits for the practice.  Meanwhile, another major operator is seeking permission to use the filthy produced water that results from fracturing ancient shale layers into a mush that can be pumped to the surface.  With nontributary approval, they can use this contaminated water to spray on roads for dust control on and off the well sites, and there also are 15 other allowed uses for this water, including reinjecting it into the deep aquifer from which it came. The problem is that the water will have become sullied, that is, mixed with ancient mud, radioactive substances, volatile compounds, drilling lubricants, and fracking chemicals.  We also discovered that only 203 (as of November 2013) voting citizens of Huerfano County are mineral lessors, and the remaining 95% of us will have to live with the mess. There are also upwards of 400 of the 800 mineral lessors from outside the county who are not being taxed for their mineral property holdings in Huerfano County. Not taxed and not registered at the courthouse means clouded titles, lost tax revenues, and possible dubious basis for unitization and pooling schemes. Our concern is that elements of the county government still have open arms for gas and oil operators. This was obvious in The Signature Newspaper Visitor's Guide recently published, wherein the Huerfano County Government invites these environmental miscreants to do business here.  Notably, there was no mention of inviting solar and wind power projects, even though we have established a wind power zone in the eastern part of the county.  We have been circumspect in sharing our findings, first communicating to the county assessor, administrator, commissioners, and planning board.  But we can be silent no longer when we see the welcome mat being put out for gas and oil and all the misery it can bring.  There are better ways to get energy for our lives than fossil fuels.  Let's not destroy the environment and incur cleanup liabilities that boost the real cost of gas and oil far higher than solar and wind energy.  Let's pay for our courthouse expenses with long-term strategies instead of dirty money from oil and gas taxes.  If oil and gas take over here we will need more than a new courthouse complex to repair the damage.
Posted by Citizens for Huerfano County at 10:46 PM 1 comment: