Summary of CHC’s biggest accomplishments over the past year and a half, and a short report on finances:

First and foremost, even though CHC’s lawsuit against the Colorado Oil and Gas Commission and Shell has not stopped Shell from continuing to invade our county, the lawsuit is doing three important things: Number 1 --It has so far prevented Shell from drilling the very dangerous Klikus well near La Veta, which is the actual subject of the lawsuit; Number 2, by keeping COGCC and Shell engaged with us in the legal system, we maintain our credibility and their respect. If we win, the lawsuit will require Shell and the COGCC to treat citizens with respect, something that did not happen at the state or local level before we filed our suit.

We really had no choice but to engage Shell and COGCC in the legal arena, because the existing so-called public process provided us with literally no effective notice on the Klikus or any effective means to bring our concerns to their attention. Only by filing the lawsuit were we finally able to make the legitimate points we should have been able to make during the public process. That, in turn, has finally made them think about our points. Our suit prevented Shell from proceeding with a flawed plan for the Klikus, and it forced them and the COGCC to listen to valid concerns from citizens.

The third major impact of our lawsuit is in leading the way for other citizens in Colorado to truly be heard, and to take similar legal action, when they find out, just like we did, that the COGCC is not protecting our health, safety and environment the way its own rules and Colorado law requires.

The lawsuit has been in the hands of Denver District Judge Ed Bronfin since September 5th.  He could rule tomorrow, or a month or a year from now. He could call the lawyers on both sides to meet with him or have a hearing. He could direct the lawyers to try to negotiate a settlement, although a settlement seems unlikely. In fact, COGCC and Shell refused to discuss a settlement with us in July. So, the judge will probably have to rule, and that means we will either win or lose. If we win, COGCC and Shell will probably appeal so they don’t have to admit their wrongs. If we lose, then we will have to decide whether we will appeal.

The second most important thing CHC has done is to help people – more than 30 that we are aware of – to get their water wells baseline tested and adjudicated. We held workshops last winter to show people how to get their wells adjudicated, and we worked hard last spring to develop a comprehensive set of legally valid and affordable tests and to promote the testing and to coordinate a workshop to explain the results.

Because of these efforts, we have accurate baseline data on more than 30 water wells in Huerfano County. Because our sampling projects follow all the proper COGA guidelines and because the samples were tested by the best EPA-certified lab in Colorado, no one can argue with the validity of these data. Now, if people who got their water wells tested and adjudicated experience damage, they will have far more power to press their claims in court than they would have had. Even people who haven’t had their own wells tested will have a stronger case.  They will be able to cite our test results in court. Finally, just like the lawsuit, these water well adjudications and baseline tests are keeping the pressure on Shell and the COGCC. As long as they know that we are protecting our water they are less likely to cut corners and take chances that might cause damage.

Our third big accomplishment was to file very substantial and detailed commentary on the four Gardner wells as part of the permit process. Our experience with the Klikus lawsuit taught us how to navigate the COGCC website and read all the forms, and how the state oil and gas permit process works. That meant we were able to submit three detailed filings on behalf of CHC, and to hold workshops to help you file comments as well. Believe me, no other citizens in Colorado have done so much to get their concerns researched, documented and filed as part of the permit process!

The COGCC approved the permits anyway, but down the road, if there are problems, we will be able to point to our filings as proof that we knew the risks of drilling and fracking in our unique geology, and that Shell and COGCC ignored them. And again, these efforts keep COGCC and Shell aware that we are serious, knowledgeable and committed to protecting our health, safety and environment. CHC can also claim credit for Shell adding several important safety features to the Gardner wells that they did not include on the Klikus filing.

In the last year and a half, we have also held film screenings, public talks, and fundraisers. We have grown our membership to more than 575 people, and we have done our best to educate our Huerfano County elected and appointed officials. At this, we have been less than successful, in spite of writing to them, meeting with them and even trying to force them to take us seriously and treat us and our concerns with respect. Going forward, this is one of our biggest challenges, but Chip will talk more about that.

I want to talk a little about our finances. First, I know I am speaking for the Board, we appreciate every dollar, and every hour of work, and every effort that everyone is contributing! We also appreciate the fiscal sponsorship of the Huerfano Community Corporation, which enabled us to receive tax-free donations until we could get our own 501c3. That finally happened in late October – after 11 months and two rounds of inquiry from the IRS – but we did it!

I have just a few minutes now for our financial report, which I think I can summarize very quickly:

In that same time frame, we have spent $50,937.00 on legal and consulting fees and, $2,225.00 on fundraising costs and $3630.00 on publishing costs.  In addition we have helped to fund a state level anti-fracking group with a donation of $3000.00.
In other words, we are currently in the black, with a balance of $9444.24. If you are not a math wizard, that means, at our current average spending rate, which is primarily on our legal expenses, this will last about 3 months.

CHC has many generous donors, but we especially want to recognize the Guacamole Fund and the Resist Foundation. In August, the Bonnie Raitt concert at Red Rocks, in conjunction with the Guacamole Fund, raised $15,000.00 for CHC.  The Resist Foundation provided emergency funding to support the SWEPI APD filing and subsequent general financial support that has allowed us to update our website and engage in state level action.  Now that we have our 501c3, we are much more likely to get grants to pursue our future activities. 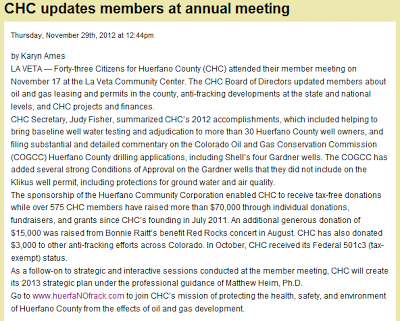