Shell says deep drilling – as far as 14,500 feet below the surface – is much safer than coal bed methane (CBM).  Citizens for Huerfano County reviews the scientific and empirical evidence below that suggests deeper is NOT safer.

In 1998 Petroglyph Energy, Inc. began developing the CBM Little Creek Field near the River Ridge Ranch subdivision between Walsenburg and La Veta, eventually completing more than 50 wells.  Wells depths ranged from  1,300 to 3,900 feet deep.  Fewer than 10 non-CBM wells have also been drilled by Manzano, LLC since that time.

Contrary to the industry’s repeated promise of jobs and prosperity, CBM ushered in an era that, in 2008, Rep. John Salazar described as “appalling and dire.”

The disastrous details are all too familiar to the residents of River Ridge Ranch and other rural Coloradans who live with oil and gas development. According to the Colorado Oil & Gas Conservation Commission (COGCC) records, the state agency responsible for regulating the oil and gas industry:
Broad industry exemptions to the Safe Drinking Water Act, Clean Water Act, Clean Air Act, Superfund Act and other laws, have allowed the release of untold amounts of contaminated CBM production waste into regional air and water sheds.

In 2007, the Colorado Oil and Gas Commission issued a rare Cease and Desist Order to Petroglyph until it could operate "in a manner that protects [the] public health and safety".  Earlier this year, Petroglyph announced it was pulling out of Huerfano County, leaving the problems outlined above and a mountain of unresolved questions about the long-term health, water resource and environmental effects of CBM extraction, in its wake. 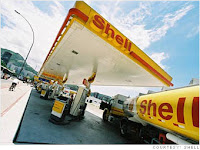 In Spring 2011, Shell proposed a 14,500-foot deep exploratory well near the town of La Veta.  If an economically feasible discovery is made, this could usher in a new wave of oil and gas development in Huerfano.

Shell insists it will avoid the problems of CBM by drilling thousands of feet below ground and drinking water sources.

Is deeper safer? Or could Shell’s 14,500-foot deep natural gas drilling result in the same kinds of problems (or worse) as Petroglyph’s 2,000-foot deep CBM wells? 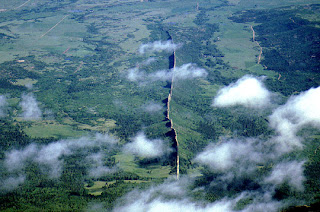 A clue to the movement of methane gas (and other frack-related substances) into the water wells in River Ridge Ranch lies in the areas unique and complex geology. Dramatic 100-foot tall radial dikes extend broadly from the base of Spanish Peaks down into the valley to the east. Both the dikes and the Spanish Peaks were formed when hot magma pushed up through the layers of sedimentary rock that contain oil and gas shales and water.

The result, according to hydrologist Thad McLaughlin, an expert on Huerfano County ground water, is "shale that normally has little or no permeability may be highly permeable where it lies adjacent to the intrusive rocks [i.e. dikes]”.

Thus, the dikes create conduits between geological zones, otherwise assumed to be isolated (Fig. 4 below illustrates how dikes cross through different strata).

How deep the dikes go is unknown, but because they are derived from magma, they are certain to extend several miles down. In 2009,  Spoon Valley Energy lost control of the drill-head when it struck an intrusive dike 6,200 feet below the surface while drilling for gas near La Veta.

"Leaky dikes" (McLaughlin, 1966, Barkman, 2004), previously undetected faults (USGS, 2001) and sand channels (Denney, 2007), are three types of conduits that could allow contaminants and fracking fluids to migrate in unexpected ways.  Without a better scientific understanding of the risks of drilling and fracking in Huerfano's complex geological environment, Shell's claim that "deeper is safer" is unfounded.

The potential for oil and gas drilling to dislodge and release naturally occurring, but highly toxic substances like hydrogen sulfide (known seeps occur on Middle Creek Road, Indian Creek and Sulphur Springs Road west of La Veta) and radioactive vanadium and uranium (there are 11 known radioactive occurrences in Huerfano County, Minedat.com) is also troubling, especially since the EPA and COGCC don't require monitoring of radioactive substances in flow back or production fluids.

Many impacts from oil and gas activities occur on the surface, irrespective of the depth of the well. Deep drilling and fracking require enormous water and chemical inputs that must be trucked over rural back roads increasing the danger of surface spills and accidents. A 2008 ProPublica investigation found more than 1,000 documented cases of contamination in the US, including cases in Huerfano County.

Pollution from flowback and open production water pits leak and are subject to flooding. Even worse, they release harmful chemicals into the air we breathe.

On top of all this, fracking uses an average of 5.3 million gallons of water per well.  What impact will a new gas and oil play have on Huerfano's already stretched water resources?   This important question will be the subject of a future post.