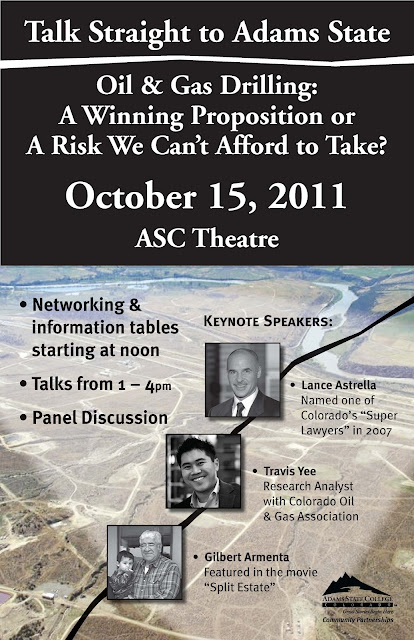 Two events in Alamosa this Saturday, Oct 15th could mark a change in the usual quiet tenor of small-town southern Colorado!

Starting at 10 am, join the solidarity march for the occupy wall street protests! Meet at Cole Park in Alamosa at 10am, and march to campus from there. Bring your signs, chants, and enthusiasm! Everyone is welcome to come! The more the better! To find out more about the occupy wall street movement, see http://www.adbusters.org/campaigns/occupywallstreet. (posted by Emmo Lütringer on Facebook)

Then at 1 pm, join in on a community discussion hosted by ASC Community Partnerships: "Talk Straight to Adams State" - “Oil and Gas Drilling: A Winning Proposition or A Risk We Can’t Afford to Take?” Key note speakers include Lance Astrella, Travis Yee, and Gilbert Armenta will start at 1pm with a panel discussion following, allowing for audience interaction.

Mr. Astrella concentrates his practice in the area of energy and environmental matters. He was named as one of Colorado’s “Super Lawyers”.

Mr. Yee graduated from Colorado School of Mines with a bachelor’s in economics and a masters in international political economy of natural resources. Mr. Yee is employed by Colorado's Oil & Gas Association.

Armenta, a fifth generation Hispanic and Native American (Cochiti) rancher, has lived with the industry in his backyard for more than half a century in Bloomfield, New Mexico.