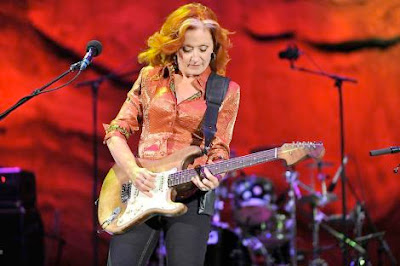 Legendary singer Bonnie Raitt and her band will be performing at the Red Rocks
Amphitheater in Morrison, CO on Sunday August 26th. Bonnie will host a special benefit reception following the show in support of regional organizations that are working to protect Colorado from the threats of hydraulic fracturing to extract gas and oil. The organizations include Citizens for Huerfano County (CHC) and the GrassRoots EnErgy activist Network (GREEN).

Bonnie Raitt is touring again in 2012 after a two year respite and premiering her new
album Slipstream which was released this spring. She has an amazing 58 other
recordings. She is a nine-time Grammy winner and inductee into the Rock N Roll Hall of Fame. She is well known, long time social change activist and is a founding member of The Blues Foundation and Musicians United for safe Energy among others. Visit http://www.bonnieraitt.com/ for more information on her tour dates, benefit history, discography and more.

Citizens for Huerfano County (http://www.huerfanofrack.org/), a CO non-profit, was one of the first grassroots groups to organize in response to the new oil and gas boom in Colorado, when, in June 2011, citizens became aware of a potentially massive (150,000 acres leased), oil and gas drilling/fracking play that could destroy the health of their communities, ecosystems, and unique cultural and historic values. CHC’s work has included: a legal battle requiring the Colorado Oil and Gas Conservation Commission (COGCC) enforce its own rules and claiming the people’s right to hearings in oil and gas matters that impact them, pressing for strengthening local and state oil and gas regulations, ongoing research, outreach and education, responding to new drilling applications, and helping communities prepare for and defend against oil and gas drilling impacts through initiatives such as well-adjudication and county-wide baseline water testing.

The Guacamole fund has worked with Bonnie and other members of the musicians’
community for over 35 years for peace with justice, the environment and a non nuclear future. More information is available at http://www.musiciansunited4safeenergy.org/,
http://www.nukefree.org/ and http://www.guacfund.org/
Posted by Citizens for Huerfano County at 11:43 AM